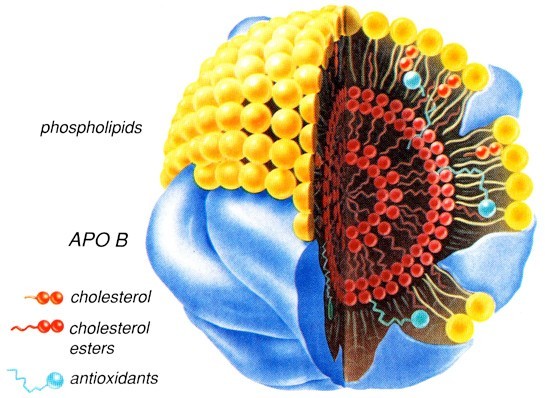 1980s, when our group in Italy highlighted its mild, yet significant hypotensive effect, and this was evident both on systolic as well as on diastolic pressure (1). Several years later we started to study CoQ10 in blood. The presence of CoQ10 in white blood cells was not unexpected, as they contain a certain number of mitochondria,  where CoQ10 is essential for energy production.  It soon became evident that most of the CoQ10 in blood is not within the blood cells but in plasma, mainly associated with LDL. These are a well-­‐ known  class  of  lipoproteins,  special  complex  particles  which  allow  lipids,  such  as  cholesterol,  to  be transported in plasma. Plasma is a rather aqueous environment and lipids (fats) do not mix well with water; the external part of LDL is very compatible with water, on the other hand their inner part is lipophilic, i.e. it well accommodates cholesterol and other fats. Like all the other structures of our body also LDL are exposed to oxidative insult and oxidized LDL, which contain  oxidized  cholesterol,  become  appetizing  targets  for macrophages,  a special  class of cells  which remove bacteria and defective molecules. These lipid-­‐loaded macrophages, called foam cells, constitute the basis of atheroma, the thickening of the arterial wall which hampers blood circulation and at the same time constitutes a very vulnerable plaque which can trigger the formation of a blood clot blocking blood flow. When this happens in coronary arteries we have myocardial infarction. It was already known that higher amounts of LDL mean increased cardiovascular risk, and it is also true that more oxidizable, therefore more vulnerable, LDL also predispose for atherosclerosis; slowing down LDL oxidation might therefore delay the formation of atheroma. In the early 1990s Roland Stocker and his group discovered that the reduced form of CoQ10 i.e. ubiquinol-­‐

10, is the most reactive antioxidant in LDL and is also capable of regenerating the active form of vitamin E, another potent antioxidant in these particles. Furthermore it was soon evident that oral supplementation with CoQ10, even for a few days, makes LDL more resistant to oxidation (2). In the following years different researchers, including our group, confirmed those data (3). Safeguarding LDL is only one of the protective effects of CoQ10  on our arteries.  We also have other kinds of lipoproteins, among them HDL (high density lipoproteins) which play a defensive role, also by protecting LDL. We recently discovered (4) that CoQ10 supplementation also leads to increased CoQ10 content in HDL and enhanced defensive activity of these lipoproteins. During the last two decades much research has addressed endothelial dysfunction. The endothelium is the inner lining of our arteries. This fundamental component of our blood vessels acts by releasing several vasoactive factors that are responsible for relaxation and contraction of arteries, inhibition of platelet aggregation  (clot  prevention)  and  smooth  cell  proliferation  (also  a  cause  of  atheroma),  and  finally  for exerting anti-­‐inflammatory   properties.   Among the vasorelaxing factors, one of the most studied is nitric oxide  (NO•). Endothelial  dysfunction  reflects  an imbalance  between  release  of vasodilator  and vasoconstrictor endothelial-­‐derived factors. A decrease in the availability of NO• involves either a decrease in its production  by endothelial  cells or in increased elimination  of NO• itself. It is known that oxidative stress is one of the causes of NO• inactivation and superoxide anion is a molecular species responsible for it. Intercellular  matrix, the material that holds endothelial cells together, is also endowed with defensive tools against NO• oxidation.  These are mainly represented by extracellular superoxide dismutase (ecSOD), an enzyme which eliminates superoxide anion. Investigating this complex molecular scenario involves sophisticated  biochemical  methods  which  are  not  routinely  performable.  Endothelial  function  can  be measured indirectly by assessing the vasodilatory  response of peripheral arteries to stimuli that increase NO• release.  One of the techniques  consists  in measuring  flow-­‐mediated  dilation  (FMD).  Using  a blood pressure cuff applied on the upper arm, blood flow is stopped for a few minutes: upon release of the cuff the sheer stress produced  by resumed  blood flow stimulates  NO• production  by endothelial  cells. Upon NO• release  there  is  an  increase  in  the  artery  diameter  which  can  be  measured  by  an  echograph.    A decrease  below  the  expected  arterial  dilation  indicates  endothelial  dysfunction,  which  is  predictive  of adverse   clinical   events.   CoQ10    positively   affects   FMD,   mitigating   endothelial   dysfunction.   The   first

observation was made by Gerald Watts and his group, who a documented positive effect of CoQ10 in ameliorating FMD, and therefore endothelial dysfunction, in a group of Type II diabetes mellitus patients (5). In the same years intensive work started in Ancona, in cooperation with Dr. Belardinelli, focused on the effect of CoQ10 and physical exercise in patients affected by coronary heart disease This cooperation led to the publication of two papers, both in the European Heart Journal. In the first one (6) we studied the effect of physical exercise alone, CoQ10  with and without physical exercise, and placebo. It was already known that  physical  exercise  improves  endothelial  dysfunction  in  patients  affected  by  ischemic  heart  disease: CoQ10 supplementation was effective to the same extent and the combination of CoQ10 + exercise was even more  impressive.    In the second  paper  we confirmed  the positive  effect  of CoQ10  in improving  FMD  in patients  suffering  from  ischemic  heart  disease  and  we  also  discovered  that  CoQ10   also  increases  the amount of extracellular SOD (7). This effect was particularly evident in patients with more altered FMD. It has been known for many years that CoQ10  improves some cardiac parameters in heart failure. A recent work (8) even showed that CoQ10, in combination with selenium, improves survival of these patients. From what we have been learning about the vascular action of CoQ10  we can reasonably hypothesize that these positive effects can be ascribed not only to ameliorating cardiac bioenergetics but also to a better function of the vessels, and in particular coronary arteries.

Endothelial function is also influenced by the inflammatory status of these cells, and ubiquinol affects these processes as well. During ageing, endothelium undergoes specific modifications characterized by enhanced inflammatory  response  and compromised  NO•-­‐producing  activity.  Very recently,  we were able to study these processes at molecular level using an in vitro model of vascular ageing, i.e. a culture of  endothelial cells  grown  in  vitro  until  they  reach  senescence.  This  enabled  us  to    evaluate  the  effect  of  CoQ10  in modulating  inflammatory  response  associated  with senescence.  This was carried out in basal conditions and  in  the  presence  of  an  acute  pro-­‐inflammatory  stimulus,  i.e.  the  exposure  to  bacterial lipopolysaccharide (LPS)(9). In senescent endothelial cells the enhanced release of inflammatory markers is known to be activated by modulation  of specific intracellular  signalling processes regulated by small non coding RNA defined microRNA (miR). Exposure to ubiquinol of young cells challenged with LPS was able to silence inflammatory-­‐associated signalling, effectively curbing cell release of interleukin-­‐6, the main proinflammatory factor responsible for SASP (Senescence associated secretory phenotype). In older cells intracellular  signalling  was also quenched although this did not translate in a significant decrease of IL-­‐6 release. This data is probably associated with an overly high inflammatory background in older cells.

Both  resistance  of  LDL  to  peroxidation  and  endothelial  function    are  positively  influenced  by  plasma ubiquinol concentration which is affected to a great extent by exogenous CoQ10. It has long been known

that after a single or prolonged administration of CoQ10  small increases can be found in heart, muscle and other organs while remarkably high amounts of CoQ10 can be found in liver and plasma and high ubiquinol concentrations in plasma certainly protect the arteries.